Chrome or Firefox recommended for WebGL version. You can also download the game below if you're experiencing lag or other issues.

(SPOILERS: Yes, the way the game ends is intentional.)

Yep that sure was bite-sized, but overall a great experience. Good game.

When they say bite-sized, they mean it. This always goes the same way, with no variation (no matter what choice you make for the dialogue).

Not bad, but it's definitely not going into my collection. :)

YOU SON OF A BI**CH, You scared the shit out of me, With the "I AM COMING FOR YOU" And making the game crash on purpose, Maybe it crashes on the website, But I wont be downloading the game to find out, Great game, Nice interactions, And I like the scary bits.

i know this is really late but it says in the description the ending is intentional.

what happens if i press ok????

i wish there were different endings according to what you say. There should also be an option to call 911, other then that its a good game. Great job

At one point the game had an error on my Chromebook, is that normal?

LOL i got an error too

yeah is part of game

i got an error too but the game isnt continuing...

the error is the ending lol

I was not expecting that kind of ending

I'm so lonely i got attached to Badguy, i want to talk to him again he seems fun

That scared the shit out of me-

wait so did he escape?

No... he got caught. That's why the personality suddenly changed.

This is such an awesome game. When the error played at the end, it made the whole thing more believable.

Also when 'BADGUY95' texted "I can imagine. May I ask you something?", I knew right off the bat that whoever was texting wasn't 'Guy' anymore because (1) they sounded so formal, (2) 'Guy' would usually swear in their sentences and (3) 'Guy' previously wasn't using any capital letters at the start of their sentences (they did use it at first but that was before they noticed the man with the 'monster square face') because they were alarmed of the man's presence so it was weird for 'Guy' to suddenly become calm after the nerve-wrecking situation.

But again, this is such a short yet AMAZING game with a cool ending.

The error is super freaky (as we all know) because it looks believable, and when we lower out guards, the weird ambient sounds play.

I really expected someone to knock on my door ngl

Lol, the ending happens then the error. It's believable.

Really cool how I got an error at the end of the game!

yeah that made me uncomfortable

is there a way to win

No. This game was made for a short-form text adventure contest, so there is only one ending.

Hi, here's my video on this game:

jesus that caught be off guard lmfao

okay was my computer supposed to crash saying there was a problem with the javascript after he said he was coming to get me?

Very nice. How kind, Mr. Badbadnotgood. He was "fine" waay too quickly...

Was a really good game! The creepiness was instantly put into play when the other person started talking about wanting to really come over to the player's house and kept insisting that it happens. The story was interesting and when the texts starts going crazy and spamming it becomes vert creepy and scary in a really good way! The only thing that I found was a little weird was that the game was trying to emulate an old school computer screen and because of that, the text and the names were a little cut out of the screen itself so it couldn't be read properly.

But other than that, it was a really well made short game and was pretty fun and creepy! Good job on it and good luck on future games!

Playing it at night with storm outside is next fucking level 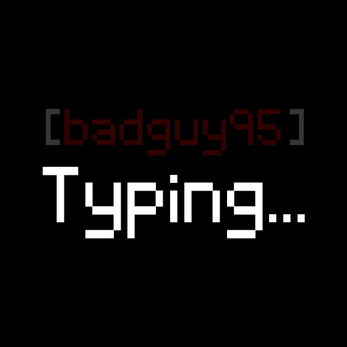